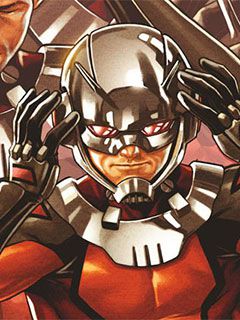 Scott Lang was an electronics expert who could not support his family doing repair work so he turned his talent to burglary. Apprehended, he served his prison sentence and was paroled in three years for good behavior. Lang had furthered his studies of electronics while in prison and was soon hired by Stark International to work in its design department. When his daughter was diagnosed as having a serious congenital heart condition, Lang sought the aid of surgeon Dr. Erica Sondheim, whom he believed to have been held prisoner at Cross Technological Enterprises. Desperate to help his daughter, Lang decided to resort to burglary. Breaking into the New Jersey home of Dr. Henry Pym, Lang stole his Ant-Man uniform and a shrinking gas canisters. Unknown to him, Pym observed the theft and in his current disguised as a Yellowjacket, followed Lang, curious to see what use he would do with the paraphernalia. Garbed as Ant-Man, Lang broke into cross and discovered Dr. Sondheim was indeed being held prisoner by Darren Cross, president of Cross Technological Enterprises, who needed her expertise to correct his own heart condition. Rescuing her and defeating Cross, Lang was relieved when Sondheim was able to save the life of his daughter. Lange intended to return the Ant-Man costume to its owner and turned himself in, but Henry Pym, aware the use which Lang put the stolen goods, offered to let him keep them, provided he put them to lawful use. Since that time, Lang has dawned the Ant-Man costume for various occasions to assist Iron Man, the Avengers, or the law, although he still considers himself a part time costume crime fighter. When Stark International became Staine International Scott Lange resigned out of respect to Tony Stark, its former head. Dividing his time between his new identity and his daughter, Ant-Man worked alongside several super heroes, frequently clashing with the mercenary trainer called the Taskmaster, against whom he aided the Avengers on two occasions. When Baron Zemo's Masters of Evil took control of Avengers Mansion, Ant-Man helped defeat the criminal super-team. He was hired by the Fantastic Four as an electronics expert when Mister Fantastic was believed dead, and he was soon inducted into the team; feeling outclassed against the powerful menaces the Fantastic Four faced, he nevertheless proved himself against a variety of foes and gained new confidence after repelling possession by the insectoid Grottu. Following Mister Fantastic's return, Ant-Man joined Heroes for Hire; upon its disbandment, he provided backup to both the Avengers and the Fantastic Four. He also dated former super hero Jessica Jones, although their relationship never became serious. Ant-Man was subsequently invited to join the Avengers full-time, a role he accepted after losing custody of his daughter to his ex-wife. Joining at the same time as Jack of Hearts, Ant-Man had a clash of personalities with the younger hero, but the two worked together to rescue Cassie from an abductor before Jack seemingly perished. Jack briefly returned, under the control of the maddened Scarlet Witch, and exploded again, incinerating Ant-Man.