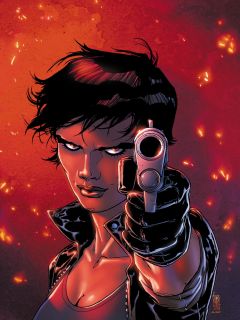 She is the director for the deadly missions of the Suicide Squad and a specialist who oversees research into people with powers. She has shown great experience in information gathering and is extremely adept in directing the espionage missions of the suicide squad.

The Wall was fully able to represent herself in front of Senate Special Investigation Committee, though she had a professional lawyer to back her up (she’s not crazy, or at least not in that way). How broad and deep her knowledge of law and legal defence is is unrevealed, but given her background and competence she presumably is a solid Constitutional law expert.

Waller is an expert at deprogramming brainwashed people. She knows of advanced techniques used by the best intelligence agencies in a comic-book world.She can even induce a light hypnotic state in willing subjects to help confront their conditioning and explore their memories.

Waller also seems to be a superior interrogator, presumably using much of the same skills she uses to intimidate and brainwash opponents

Firearms: She clearly was trained as a firearms operator.Waller could even accurately fire Duchess’s mega-gun, a heavy weapon with a fierce kick, thanks to her weight, strength and low centre of gravity.She is extremely skillful in the use of firearms,

and is an expert Markswoman.

Waller is physically unimposing, and is visibly athletically challenged. Howbeit, she should nevertheless not be underestimated in a physical confrontation.She’s not afraid of violence, there’s 200 pounds of her, she has a superior killer instinct.Waller once took down the Blue Beetle – though she attacked by surprise and by putting all her weight behind a kick with a heeled shoe that hit a recent wound. She could also prevent Count Vertigo, a strong and skilled fighter, from stabbing her.She generally seems to have non-trivial brawling experience.She’s no field agent, but it is entirely possible that she might prevail against a well-trained, experience hand-to-hand fighter thanks to sheer aggression, mass and determination.

Amanda Waller’s determination, intelligence and sheer strength of character are truly exceptional. She managed to overcome a mountain of obstacles, and started at about the lowest level. Within years an old, fat, short, homely, Black, impoverished, poorly educated single mother of 5 from a decayed ghetto made herself a Washington insider and shady figure of power.

Waller is a master of intimidation, and has used blackmail and deceit too control some of the most powerful super criminals on the planet.She can enters a balls-out negotiation with no preparation against skilled operators and prevail, using every little bit of leverage.

Waller became an influential, well-connected intelligence insider within but years. Information has a marked tendency to flow her way — if it’s out there, Waller will inevitably hear about it — and she very quickly learned to play the Great Game.She understands manipulation, lies, intimidation, deceit and death like few do, and is entirely willing to play dirty. SHow she developed her extensive intelligence network is unrevealed, but it seems likely that much of it comes from Checkmate. It is probably where the Wall got to develop her contacts with spies, counter-spies, police, the military, mobs and the like, learned to play the game, and started extensive favours-bartering.

Amanda has a degree in political science, having started as a government official, and even had a term of presidency.

Waller’s smarts should never be underestimated.Though from the outside her operations seem messy, one should keep in mind that she’s taking on cases that nobody else will touch, using mostly thugs and psychopaths.The Wall particularly excels at perceiving at a glance what’s on the table. Who wants what, who has what constraints, what are the weaknesses and moral imperative she can use as leverage to force people to do her bidding, who hates whom, what sort of figurative ammunition she has against whom, etc. Having raised numerous children helps, particularly when it comes to spotting lies.She even picked up the essentials of special military operations command, presumably from Colonel Flag, and has a good understanding of how to use all sorts of exotic assets.