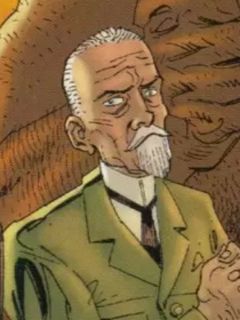 Following his retiring from the public eye after his many adventures, Quatermain came to live in Cairo, where he became an opium addict and a recluse. However, he was eventually sought out by Mina Murray to be a part of her League of Extraordinary Gentlemen, a group being gathered on behalf of the British government to retrieve the stolen metal Cavorite, vital for the country's space race. Initially he refused, but when locals tried to rape Mina his old heroism kicked in, and he saved her. Pursued by an angry mob, the two fled to the docks and the safety of the Nautilus; unable to return to his home in Cairo, Quatermain agreed to join Mina and Captain Nemo. He subsequently aided Mina and Inspector Auguste Dupin in the capture of Edward Hyde in Paris, although he was also responsible for Mina getting captured by Hyde in the first place.

After capturing and recruiting Hawley Griffin, a.k.a. the Invisible Man, the League started to track down the missing Cavorite. Quatermain and Henry Jekyll (Hyde's alter ego) scouted out the Limehouse area where it was believed to have been taken. They then infiltrated a poorhouse built over a hidden base where the Cavorite was being kept in the clutches of a tong led by a Chinese crimelord called 'the Doctor'. Successfully (and brutally, thanks to the involvement of Hyde) retrieving the mineral, they handed it over to their superiors, only to discover their orders had come from the infamous Professor Moriarty, another crimelord who immediately used it to launch a vast airship and initiate an aerial battle over London against the army of his Chinese rival. The League boarded the airship, and during their attack Quatermain managed to take out Moriarty's personal bodyguards, although he failed to kill Moriarty himself.

Subsequent to this the League was sent to investigate the meteorite landings that preluded the Martian invasion. After Griffin betrayed the League and attacked Mina, she and Quatermain were sent away together to track down Doctor Moreau and recruit his aid in fighting the Martians.It was during this period that he and Mina became lovers, although things were briefly complicated by Quatermain discovering the scars left on Mina's neck by Dracula. Having found Moreau, Quatermain and Mina returned to London, but were horrified to learn that the creature Moreau had given them was a hybrid virus, that would kill innocents as well as the Martians. With Griffin and Hyde dead, casualties of the brief war, Nemo resigning from the League in a fit of rage at their use of germ warfare, and Mina leaving Quatermain due to confusion about her feelings, Quatermain was left alone in the League, uncertain what to do with himself now...