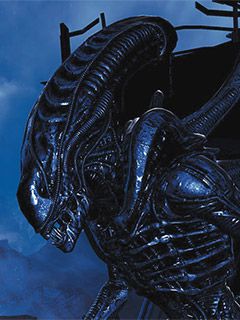 There are several different phases to a Xenomorph's life-cycle, and what kind of adult Xenomorph will come into existence depends entirely on the being that it hatches from.

Eggs are lain by an Alien Queen, and exiting her body through an overgrown egg sack. The egg is a leathery sack approximately 2.5 feet tall. They are the very simple first step in the Xenomorph life cycle.

The Facehugger is what lays inside the egg. After a certain amount of time or if a host were to come too close to an egg, the Facehugger inside senses it through pheromones, and the egg opens up like a blossoming flower with the Facehugger launching itself out and planting itself onto the host's face.

Its long tail will wrap around the host's neck, and it will grip the head with its long eight legs - the Facehugger resembles a flat spider, in a sense. It has acidic blood and will bleed the acid on its victim if cut, and if attempts are made for it to be pried off, its tail tightens around the host's neck and a chemical will cause them to go into a cardiac arrest. The Facehugger also makes its host unconscious with oxygen deprivation. Once the Alien embryo is planted into the host's body, the Facehugger will detach, and die shortly afterwords. The host will wake up with no recollection to the event.

As time passes, the egg that was planted inside of the host will begin to stir. Then, it will begin to claw its way out of the host's chest, through the center of his ribcage. This obviously causes extreme pain, and as soon as the Chestburster breaks through, the host dies. It will then flee at top speeds to grow into its adult form and become even more dangerous. Its appearance changes in its variations, but it is small, with an elongated cranium, pale or dark skin, and a long tail - almost like a snake. Basically, Chestbursters are infant versions of Xenomorphs.

There are many different kinds of Adult Xenomorphs - however, they share the same general appearance. After the Chestburster has fled, it will wait and mature, shedding its old skin to reveal the darker kind, and its head will expand backwards into a crescent shape. It will grow arms and legs, its tail will lengthen and become much stronger (even to the point of being able to impale fully grown humans), and its blood will be much more acidic. Xenomorphs have many distinguishing features, namely:

Xenomorphs are the stuff of nightmares - they are vicious, cannot be reasoned with, and will never, ever give up. They operate entirely on the instinct to survive and propagate their race, but are surprisingly intelligent, able to remember through genetic memory their host's life and past. They communicate with a Queen and each other through changing pheromones and/or sub-supersonic sounds.

There are several variations of adult Xenomorphs, as they take on the characteristics of the host from which they hatch in order to better adapt to their environment. Countless varieties have been proposed throughout the various forms of media in which Xenomorphs have been depicted. Video games have added a considerable amount of these in order to create unique enemies of differing strengths and capabilities for players to fight. These variations are typically the result of Xenomorphs hatching from different kinds of hosts, but they also sometimes result from genetic tampering with the Xenomorphs by organizations seeking to exploit the race's unique abilities.

There are a select few that are most often depicted however, namely: