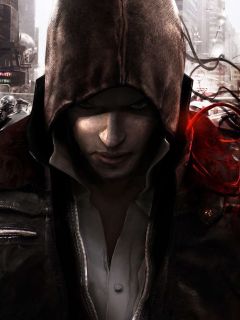 Born as Alexander J. Mercer, Alex experienced a brutal childhood spent in abject poverty; his first nine years were spent in foster care. When he turned 10, he was finally returned to his mother, who had spent the last nine years in prison, but for Alex it was better to be in foster care. He was the only parental figure for his sister Dana.

However, his intellect and aptitude in science provided him an opportunity to leave behind his troubled past. He trusted no one, had no friends, couldn't care less about what others thought of him, and found solace only in his work. By the time he was hired by Gentek, Alex was a borderline sociopath. He knew this, and didn't care.

Alex Mercer awoke in a morgue with no memories, completely unaware of what happened to him. He breaks out of the morgue, only to be attacked by Blackwatch soldiers. Through consumption of one of the Blackwatch soldiers, Alex is able to locate his sister, Dana Mercer, who tells him that he had asked her to do a little digging into GENTEK to see what they were hiding. Alex had no recollection of this. Alex Mercer goes on a journey to find out who he is, what's happened to him and why. Later, Dana recovers information on Elizabeth Greene, who is imprisoned in the GENTEK building. Alex, in his quest to learn more, sets Elizabeth free. She escapes from him as well, telling him as she flees that she is his mother. As she escapes out of the window she sets some infected people on Alex, knocking him out of the window. He manages to defeat them in combat, but by this time Elizabeth has infected the whole city.

Alex meets up with his girlfriend Karen Parker asking her to help him find a cure, and she instructs him to go to infected hives and collect genetic material and bring it back to her. But Karen betrayed Alex, using him to collect the material that was ultimately intended to form a weapon to be used against him. He is lured to his foe, The Specialist, who injects Alex with a parasite that limits Alex's powers.

Alex seeks the help of Doctor Ragland to cure him of the parasite that the Specialist injected into him. He is instructed that he must find a lead hunter, inject him with a special serum Ragland made, and consume him, to rid himself of the the parasite. Alex kills the parasite and is able to use his full abilities once again.

A lead hunter kidnaps his sister Dana, forcing Alex to chase the creature all throughout New York City. Ultimately Dr. Ragland and Alex recover his sister. At this point the military starts releasing a chemical called 'Bloodtox' underground to force the infection to surface where they can get rid of it once and for all. This draws Elizabeth Greene out, and when she emerges from the ground she appears to have mutated herself into some sort of huge creature. After a battle, Alex defeats and consumes her. The military starts pulling out of Manhattan, and Alex realizes that they intend to drop a nuclear bomb on the island, a plan which he thwarts. However, he himself is destroyed in the blast. Later on red liquid remains are shown on the outskirts of Manhattan, and Alex starts to reform his entire body from a single cell.

In 1969 Blackwatch tested a special virus, black-light, in Hope, Idaho. It killed nearly all of the population. Elizabeth Greene was one of the survivors of the outbreak, instead of dying from the virus she adapted to it, bonded with it, and it became apart of her as it rewrote Elizabeth's genetic code. Her son Pariah was taken by Blackwatch and is currently being held at another facility. Hope, Idaho was completely destroyed by a nuclear bomb, and Elizabeth and her son Pariah were kept for further experimentation.

Alex looked for the truth, found it, and didn't like it. When GENTEK employee's started to vanish, GENTEK employee Alex Mercer took a small sample of the virus he had been modifying, Dx-1118 variant A, as a guarantee that he wouldn't be killed. He was cornered by Blackwatch soldiers and was shot down. As he was shot, Alex threw the vial containing the virus on the ground, releasing ZEUS. As Alex Mercer's dead body lay on the ground ZEUS entered his blood stream, consuming his body. The Alex Mercer alive today is in fact the Virus extracted from Elizabeth Greene and modified. Alex was artificially created, Elizabeth Greene is his "mother".

Alex finds out that Elizabeth Greene had a child, Pariah, Alex's virus "brother", and he is locked away in another facility. Pariah is said to show no signs of the virus, and appears quite normal, yet he demonstrates the same abilities as Alex and Elizabeth. Pariah kills everything he comes in contact with. He can accelerate the virus to limitless proportions, and can basically force things to evolve. Only alex and pariah have the same DNA but alex is more powerful then greene and pariah together making him the strongest infected ever

He was killed due to a nuclear bomb on an aircraft carrier and a crow picked up one of his infections and consumed it and became Alex again.