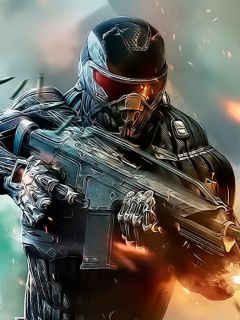 James Rodriguez, also known by his nickname "Alcatraz" is the protagonist in Crysis 2, the novel Crysis Legion which contains additional personal background about him, and also by extension Crysis 3. He is a Force Recon Marine originally sent to New York City to (unknowingly) combat the Ceph, before receiving the CryNet Nanosuit 2 from Prophet, and ultimately becomes a "reincarnation" of Laurence Barnes, as shown in Crysis 3, having merged with the original's personality and consciousness being stored within the nanosuit.

Alcatraz was part of a Force Recon Marine Unit coming to extract Dr. Nathan Gould via submarine, but their insertion goes hay-wire as the Ceph attack the submarine, leaving Alcatraz as the apparent sole survivor. Prophet finds him half-dead in semi-consciousness. The only way Prophet saw to winning the war was to give Alcatraz his Nanosuit 2.0, which is keeping him alive.

Alcatraz suffered severe injuries, including ballistic trauma to his heart, lungs, vertebrae, and sternum; multiple ruptures in his lungs; several broken ribs; a flail chest segment; and extensive pulmonary bruising. After receiving the Nanosuit 2.0, the fibers of the suit begin healing into his wounds - fusing with his body and essentially causing suit power-loss or shutdowns to be lethal to him.

Alcatraz awoke and found Prophet's dead body lying next to a now-empty M12 pistol, learning he had been infected with the Manhattan virus and then committed suicide. Alcatraz was then contacted by Dr. Gould - who mistakes him for Prophet - who urges the former to come to his laboratory. Subsequently, Alcatraz comes into violent contact with C.E.L.L., who believed that he is Prophet.

While on his way to Gould's laboratory, Alcatraz witnesses several C.E.L.L. helicopters shooting down a Ceph Dropship, which crashes not far from his position. Gould asks that he head to the crash site and search for any alien tissue samples in an attempt to counter the Manhattan virus. Alcatraz was unsuccessful in the matter and was attacked by a Ceph Stalker. Alcatraz killed it and manages to gather a tissue example (called a Nano Catalyst) from its corpse, which triggered strange reactions within the deep layers of the Nanosuit.

Alcatraz eventually meets up with Gould only to be met with hostility when he finds out that he is not Prophet. However, when the suit plays Prophet's last recorded message, Gould relents and informs Alcatraz that ever since the suit absorbed the alien tissue, the Nanosuit's deep layers had been undergoing a mysterious processing routine with an unknown purpose - Gould theorized that the results of the suit's processing may contain a solution for the Manhattan virus and a way to combat the Ceph. Gould and Alcatraz committed to further scans at a CryNet base on Wall Street. The scans were cut short when C.E.L.L. forces led by Commander Dominic Lockhart and Lieutenant Tara Strickland ambushed Alcatraz and Gould.

After surviving the ambush the two eventually head to CryNet in order to do a full diagnostic on Alcatraz's Nanosuit. They are caught by Commander Lockhart and Alcatraz's suit is (at least partially) disabled. During the middle of the prisoner transfer outside the building, the Ceph attacked C.E.L.L. personnel in the form of a massive alien spire, releasing an alien spore that kills most of the C.E.L.L. troopers in the immediate area. Alcatraz is left stranded and isolated for a period of time while dealing with a Nanosuit malfunction brought upon by the spore.

The suit gets rebooted remotely by former CryNet director Jacob Hargreave; when Alcatraz awakens, he discovers the Ceph have begun a full-scale invasion against New York City. Under Hargreave's instruction, Alcatraz infiltrates deep into Ceph territory, eventually entering one of the alien spires to test whether the Nanosuit's systems can interface with the aliens' technology. The experiment fails, due to the Nanosuit not being powerful enough to ensure the insertion. Alcatraz is later swept away by a massive flood due to a bombing of the Rawson flood barriers ordered by the Pentagon in an attempt to drown the Ceph in Lower Manhattan (despite Hargreave's objections).

Alcatraz is later found by a squad of U.S. Marines, who were led by his marine comrade Chino, who survived the submarine's destruction. The marines enlist his aid in evacuating civilians to Grand Central Terminal, the city's primary evacuation point.

Hargreave contacts Alcatraz and revealed that the Nanosuit was busy analyzing the Ceph tissue samples that Alcatraz had previously recovered and is currently rewriting its own code to interface with alien technology. He tells Alcatraz and his marine allies to take a detour to the Hargreave-Rasch building, the primary Manhattan research building of CryNet's parent company, Hargreave-Rasch Biotechnologies. There, Alcatraz was told to find a stabilizing agent in the bio-lab to facilitate the Nanosuit's analyzing process, but C.E.L.L. operatives under the command of Lockhart attemptted to kill him. The Hargreave-Rasch complex is then attacked by a Pinger, washing Alcatraz away from the bio-lab.

Left on a dead end, Alcatraz is told by Hargreave to regroup with the marines at Grand Central Terminal to help evacuate the civilians. After fighting huge amounts of Ceph and even collapsing an entire building to halt Ceph mortar fire, Alcatraz reunited with Gould and Colonel Sherman Barclay at Grand Central. The latter enlisted Alcatraz in defending Grand Central when the main hall is overrun by Ceph forces. Due to the hasty and incomplete evacuation from Grand Central, Alcatraz was then tasked with defending a secondary evacuation point based in Times Square, when another alien spire rises from the ground. This time, the Nanosuit had finished processing the Ceph spores, and Alcatraz manages to enter the spire, allowing his Nanosuit to interface with it and re-purpose the spores to instead kill the Ceph. This causes a cataclysmic self-destruction of all Ceph in the area, and apparently removes all traces of the biological warfare agent.

With the evacuation from Times Square complete, Hargreave instructed Alcatraz to make his way to Roosevelt Island. There, Alcatraz infiltrates CryNet's complex, the Prism, where Hargreave resides. After another failed attempt by Lockhart's forces to trap and kill Alcatraz, Hargreave ordered Alcatraz to kill Lockhart and end his interference once and for all. Alcatraz managed to kill Lockhart, but as he makes his way through the island, he is captured by Hargreave, who wants the Nanosuit for himself so that he can finish off the Ceph personally. Hargreave's men then attempt to remove the Nanosuit from Alcatraz's body. However, the Nanosuit rejects its removal from Alcatraz since it had already completely assimilated with its wearer - revealing memories of Prophet's fallout with Hargreave in the process.

Alcatraz is then saved by Tara Strickland, who reveals herself to be an undercover CIA operative, and the one responsible for ordering the original deployment of Alcatraz and his Force Recon team to New York. Strickland tells Alcatraz to capture Hargreave, but upon entering Hargreave's private office, Alcatraz discovers that Hargreave has been in a vegetative state for nearly fifty years, and that his consciousness is only able to communicate and interact through the use of an entirely computerized system. Alcatraz is given by Hargreave, a last Nanosuit's final upgrade: the "Tunguska Iteration". Hargreave then triggered a countdown timer for the self-destruct system of the complex, and convinces the remaining C.E.L.L. forces guarding the Prism complex to aid Alcatraz's exfiltration. Alcatraz barely escaped the massive explosion, which destroys much of Roosevelt Island and the Queensboro Bridge. Alcatraz reunited with Gould, Strickland and Chino.

The trio are then informed by Colonel Barclay that the U.S. Department of Defense, in a desperate plan to wipe out the Ceph and prevent the spread of the Manhattan virus, has decided to launch a S.T.R.A.T.C.O.M. tactical nuclear strike against Manhattan Island, with little regard to collateral damage and nuclear fallout. Barclay asserted that the strike can be avoided, but only if Alcatraz ends the war over New York in twenty minutes. As Alcatraz and his comrades make their way through the city toward the center of the alien infestation, a massive alien "litho-ship" rises out of the ground beneath Central Park, lifting a large section of the park into the air. With the peripheral aid of Gould, Strickland, and Colonel Barclay, Alcatraz assaulted the floating section of Central Park and succeeded in making his way to the alien spire at its center, which serves as a massive dispersal point for the alien spore bio-weapon. He entered the spire and his Nanosuit, with the Tunguska Iteration upgrade, and is able to repurpose the spire's bio-weapon to turn against the Ceph, killing all Ceph in New York in the process.

Alcatraz, while unconscious, communicated with Prophet - whose memories, experiences, and personality had been stored in the suit - who states that, while the mission in New York is a success, their work is not yet over, since the Ceph, who had been present on Earth since prehistoric times, had built constructs all over the world, and were not only limited to New York and the Lingshan Islands. The Nanosuit, before rebooting again, states that assimilation is complete, and Prophet's memories become "assimilated" into Alcatraz. Upon waking up in Central Park, Alcatraz receives a broadcast from Karl Ernst Rasch asking for his name. Alcatraz responds with "They call me Prophet".

Alcatraz is then being questioned by the CSIRA BlackBody Council about the Ceph-Human war from his perspective and his condition from being integrated with the nanosuit.

At the beginning of Crysis 3, it is revealed that Alcatraz was lost when the spire was sabotaged at the end of Crysis 2. The memories and consiousness being of Laurance Barnes embedded in the suit assimilated Prophet's mind into Alcatraz's body. But in Crysis Legion it is shown that Alcatraz still has his mind, but has bonded with the memories and knowledge of Prophet following Crysis 2, so this part was retconned.

In Prophet's character information, it is said that Barnes was no more than a ghost haunting the machine. A deadly weapon system made from alien upgrades and knotted nano-musclepacks wrapped around a stolen corpse, dreaming it was once a man named Laurence Barnes.

It was also stated in a nanosuit log that the Alcatraz personality file became corrupted beyond repair (42% of data corruption) after his mission to repurpose the Ceph black spore, and therefore it was placed in "indefinite storage after instabilities detected", meaning that Laurence Barnes became the only active personality in the host body, therefore Alcatraz's mind can be considered dead or dormant. It is unknown whether his personal mind would return in absence of the Nanosuit, but it's impossible for him to be released, since his body is technically a corpse fueled by the suit's symbiotic nature and became its integral part through the nanites fusing to it.

The fate of Alcatraz is contained in Crysis Escalation novel.
Superhero Class