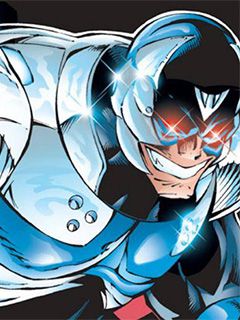 The man known only as Francis was the former enforcer at Doctor Killebrew's laboratory, known as the Workshop, part of the Hospice for failed supersoldiers at the Weapon X Project. Francis acted as the strongarm for Killebrew, reigning in the project's "washouts" that were fodder for Killebrew's sadistic experiments whenever they stepped out of line. This included one Wade Wilson.

Francis himself had been modified by Killebrew - his nerves had been removed for better pain management, he had enhanced strength and intuitive capability, as well as having received subcutaneous implants for super-speed and agility, making Francis a fearsome opponent.

After endless taunting from Wilson, Francis was given permission by Killebrew to kill him when he manipulated events to have Wilson mercy kill one of the other inmates, which was against the rules as devised by Killebrew. After removing his heart Wilson's healing factor first manifested itself, regenerating the mercenary a new heart but also costing him his sanity in the process. Taking the codename Deadpool, Wilson hunted Francis down and seemingly killed him.

Somehow Francis survived, and resurfaced years later as Ajax when he hunted down and killed many of the surviving members from the Weapon X project in order to exact his revenge on Deadpool. After torturing Killebrew at his mountain home in the Alps to obtain Wade's teleporter frequency, Ajax teleported Wade next to a nearby cliff and sucker-punched him, sending Deadpool to his death, again.

In a near death experience, however, it was revealed that because Wade came back from the dead once to kill Francis, he was now bound by honor and destiny to finish the job he began those many years ago, urged by the ghosts of Francis' victims who had also been Wilson's friends. The battle continued as Deadpool rescued Killebrew and sought shelter at Killebrew's neighbor's house. This was owned by Ilaney Bruckner who was reluctantly dragged into the conflict when Deadpool destroyed her house to slow down Ajax.

Ajax caught up with the trio and proceeded to punch Deadpool repeatedly at super-speed. Before he could kill Deadpool, however, Killebrew doused him with gasoline and lit up a flare, destroying Ajax's head and neck protection. For doing this, Killebrew was shredded at super speed.

Once again catching up with the fleeing Deadpool, Ajax fell victim to a trap laid by his intended victim which resulted in his armor's circuitry being exposed. Taking advantage of this, Deadpool arranged for Ajax to plunge both of them into a lake, short-circuiting his armor and giving Deadpool the opportunity to kill him, which he did by snapping his neck.