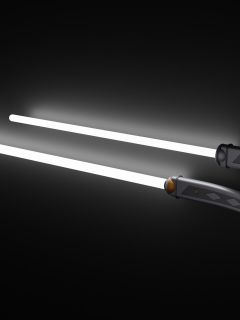 After the Battle of Yavin, Ahsoka's Lightsaber (White lightsaber) is the first of her lightsabers after receiving a kyber crystal on a Gathering to the remote world of Ilum. She brought it with her when she traveled to the planet Christophsis in the first year of the Clone Wars upon being appointed the Padawan of Jedi Knight and General Anakin Skywalker, who was fighting to take the planet back from the Separatists with his former Master Obi-Wan Kenobi.