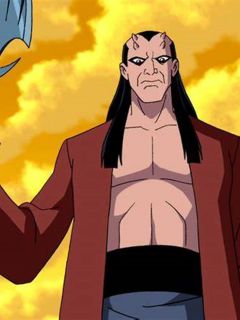 Sometime after Kevin and the Amalgam Kids failed to capture Ben Tennyson, Servantis created Aggregor as a lab experiment, using Kevin's DNA to create a perfect copy of his absorption powers. Just like the other prisoners of Servantis, Aggregor was taught about aliens and their powers. However, after Ben removed the Omnitrix, Servantis wiped Aggregor's mind and set him loose as well, since there was no need for an army anymore.

Studying the legends of the universe, Aggregor learned about the Forge of Creation.

In Escape from Aggregor, it is shown that Aggregor captured Bivalvan, Galapagus, P'andor, Andreas and Ra'ad to absorb all their powers and abilities using a machine he had built back on Osmos V in order to become strong enough to gather and reassemble the four pieces of the Map of Infinity so he can travel to the Forge of Creation and absorb the powers and abilities of a newborn Celestialsapien so that he can become omnipotent (which he refers to as "The Ultimate Prize"). However, his prisoners were able to escape to Earth.

In Fame, after Bivalvan was defeated, he explains that Aggregor captured him along with four others but they managed to escape to Earth. At the end of the episode, instead of the Plumbers who Bivalvan was expecting to send him back to his home planet, Aggregor appeared. His first line was "No one escapes me, Bivalvan" and he captured him.

In Escape from Aggregor, Galapagus told the tale of how he and the other four aliens were captured and escaped. At the end of the episode, when Ben sent Galapagus back to Aldabra, the Plumber that was transporting him is revealed to be Aggregor in disguise.

In Too Hot to Handle, after Ben, Gwen and Kevin succeeded in subduing P'andor and had him sent home. Aggregor attacked the ship transporting him. Aggregor's attack resulted in the Plumbers being flung into space, killing them, while he recaptured P'andor.

In Andreas' Fault, Aggregor found Andreas buried underneath the remains of a Forever Knight castle before transporting him back to his ship and putting him in a stasis pod alongside Bivalvan, Galapagus, and P'andor, with only Ra'ad remaining to be recaptured, after which he states that then "the fun begins".

In Fused, Ben, Gwen and Kevin met Aggregor face to face. It was revealed by Ra'ad that Aggregor was using the signal of the Ultimatrix to locate the aliens. Ra'ad attempted to destroy the Ultimatrix to prevent Aggregor from finding him, but the Ultimatrix attempted to scan his DNA at the same time, resulting in Ra'ad being trapped in the Ultimatrix and AmpFibian was the only alien Ben could turn into. When Aggregor arrived by crashing through the roof, and demanded to know where Ra'ad was, the team fought him, with Ben transforming into AmpFibian. Aggregor decided to use AmpFibian as a replacement for Ra'ad, but before he could subdue him, Gwen used a teleportation spell to teleport herself, Kevin and AmpFibian to Kevin's warehouse.

Aggregor returned to his ship to have his sensors track the Ultimatrix signal, but it was off-line because of Ra'ad's attack. Gwen and Kevin rebooted the Ultimatrix to separate Ben and Ra'ad, allowing Aggregor to find them again. Knowing he would be coming, Ra'ad quickly fled just as Aggregor came in through the roof again. After dispatching Kevin and Gwen, Aggregor demanded AmpFibian from Ben, who confronted him as Brainstorm. Unfortunately, Aggregor used his spear to ground Brainstorm's lightning attacks and neutralized his electrokinetic powers by firing red energy blasts onto his brain.

Aggregor then attempted to change a severly weakened Brainstorm back into AmpFibian for his plan by stabbing and manipulating his Ultimatrix symbol with the blade of his spear (nearly killing Brainstorm in the process). However, Ra'ad, having been given a lecture by Kevin, returned and attacked Aggregor, saving Brainstorm. Aggregor regarded Ra'ad's actions as "noble" before he clashed with the Amperi and quickly overpowered him, but Ra'ad grabbed Aggregor's spear and electrocuted it, resulting in a huge explosion that destroyed the warehouse, but Ben and Gwen were able to escape while Aggregor captured Ra'ad during the blast. With all five of his prisoners recaptured, Kevin feels Aggregor has won, but Ben, having scanned all five aliens, vows to use their powers to stop Aggregor.

In Ultimate Aggregor, it was shown that after Aggregor escaped the warehouse's explosion with Ra'ad, he traveled out into the desert to call his ship and transport him. However, he found himself ambushed by the Plumbers. Unfortunately, Aggregor was prepared and unleashed a torrent of laser cannons to bring down the entire ambush while he transported himself and Ra'ad to his ship. Just as he was about to make a jump to Osmos V, the lead Plumber of the ambush used one of the downed ships to take out the hyperdrive of Aggregor's ship. Unable to leave Earth, Aggregor had to come up with a new plan. When Ben and his team tracked his ship, they were attacked by Aggregor's robots but defeated them. When Ben, as Lodestar, boarded the ship, it self destructed, but Lodestar was able to survive with his magnetic abilities pulling him back together.

Meanwhile, Aggregor broke into Los Soledad with intent on using the Entropy Pump from Professor Paradox's old time-traveling experiment as a replacement for the machine on Osmos V. Upon discovering where he was, Ultimate Swampfire and his group stormed Los Soledad, charging through the remainder of Aggregor's robots. Needing more time, Aggregor used a Mind Control Headband to have the five Andromeda aliens attack them. Upon being freed from his control, Aggregor recalled the aliens. When the team confronted Aggregor, Kevin warned him not to go through with his plan, mentioning that absorbing energy causes Osmosians to go insane, while explaining his own acts in the original series. Aggregor however, refuses to believe it, claiming that powerful Osmosians told that to weak Osmosians to control them. Before Kevin could convince him otherwise, Aggregor used the Entropy Pump to transfer the powers and abilities of the five aliens into himself. Humungousaur managed to stop the pump before it destroyed reality. Unfortunately, it was too late as Aggregor had completely absorbed the five aliens, transforming into his mutated state, a massive chimeric mutant, named Ultimate Aggregor.

Azmuth reveals that the reason Aggregor absorbed the aliens was so that he had the power to find the four fragments of the Map of Infinity, which will allow him to enter the Forge of Creation and obtain the greatest power in the universe. In order to stop him, Ben and the others must keep him from getting at least one of the fragments.

After going through a temple filled with booby traps on Mykdl'dy, Ultimate Echo Echo and the others nearly reach the first piece, but due to Four Arms and Kevin being forced to hold up the door that leads to the chamber holding the piece and Gwen being hit by a poison dart, they were powerless to prevent Ultimate Aggregor (who used the trio to discover the traps and lead him to the first fragment) from escaping with the first fragment of the map.

In Deep, Ultimate Aggregor invaded the core of Piscciss to steal the second piece of the map, which was in the form of the planet's anti-gravity generator. With the ocean planet falling apart, Ultimate Big Chill had no choice but to save Piscciss and let Ultimate Aggregor escape.

Sometime afterwards, Aggregor was taken into custody by the Plumbers before eventually being sent to the Null Void.
Superhero Class