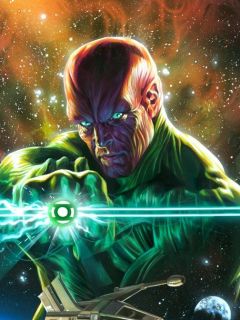 Originally a history professor on the planet Ungara, Abin Sur was soon appointed Green Lantern of Space Sector 2814 in the mid 1860's. As a child, he became best friends with Ruch Ehr and later, by association, Munni Jah. The two of them were a couple and Abin secretly loved Munni, but never overtly spoke of this.

Recruited by the Green Lantern known as Starkađr, he is known to have come to Earth on several occasions. In the Old West, he teamed up with an ancestor of Hal Jordan to battle an alien named Traitor (who was responsible for the death of Starkađr).

During World War Two, he briefly encountered Starman and Bulletman when the three battled an alien being under the control of Mr. Mind. He also visited Earth at some point between the Golden and Silver Ages, when he encountered the Martian Manhunter.

While on patrol, he was attacked and pursued by the being known as Legion while on its way to Oa. Badly injured and with his space ship seriously damaged, he made an emergency landing on the nearest habitable planet (Earth) and began using his power ring to search for a successor to wield the ring after he passed on. The ring settled on Hal Jordan as the most suitable replacement right before his death.

For a brief time during Zero Hour, he was pulled to the present, where he assisted the Darkstars in their battle against Entropy before being returned to his own time.

In the afterlife, Abin Sur assisted Swamp Thing (Alec Holland) in rescuing his daughter Tefé from Hell. It was later revealed that part of his very own soul was being tortured in Hell while his spirit acting as a companion to Hal Jordan during his brief stint as the Spectre. Eventually, he freed himself from Hell and assisted Jordan on several spiritual adventures and metaphysical dilemmas. Eventually, Abin Sur engaged in the Karamm-Jeev Descent, an Ungaran form of reincarnation, and was reborn as Lagzia, the daughter of Sur's old friends Ruch Ehr and Munni Jah.

During some point in his life, Abin sired a son, Amon Sur, who grew up to become the man in charge of the Black Circle crime syndicate. Amon was angry at his deceased father for abandoning him for the Green Lantern Corps and decided to take his anger out on all Green Lanterns. Amon was eventually stopped by Abin's successor's successor, Kyle Rayner and a second-generation Guardian of the Universe called Lianna.