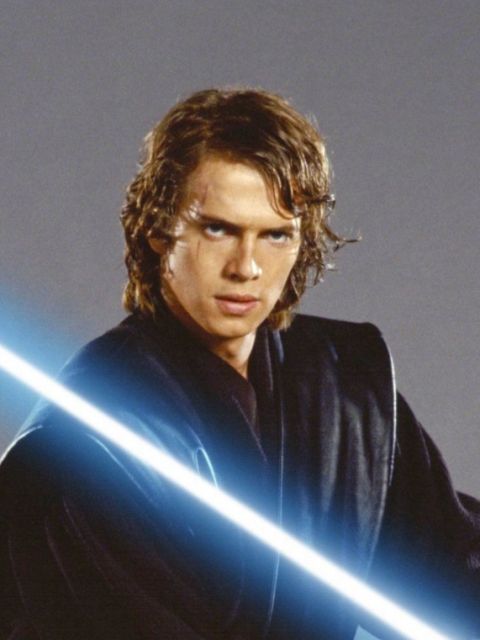 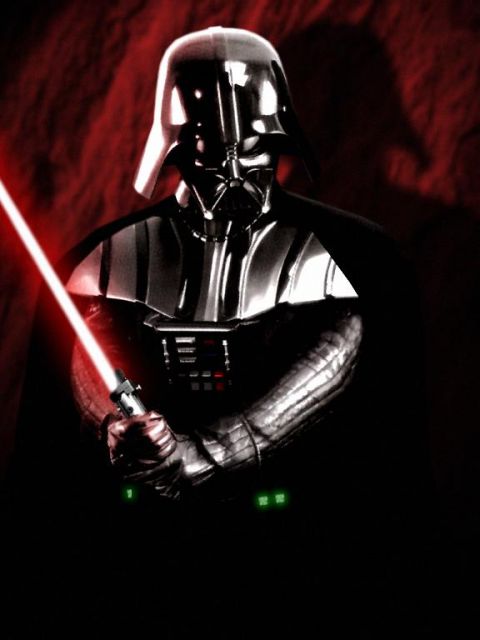 Anakin Skywalker Vader is a weakened version of his former self and his nowhere near as strong in the force.
Part of this is due to less of his physical body even being intact.
Furthermore, Anakin has proven his self to a much higher degree in his feats and Vader is clearly symbolized as the weaker, crippled, future war-scarred monster that he is.
show 7 replies

"This duel was very different from their last. Obi-Wan was older and weaker while Vader was even stronger, fueled by hatred and thirst for revenge."
> Jedi Battles

"In his duel against Darth Vader on Bespin, Luke Skywalker reveals himself as an extraordinarily gifted artist with the blade who has largely taught himself. After a single brief session with Obi-Wan Kenobi years ago, and only a short time with Yoda, Skywalker is able to hold up against a Dark Lord of the Sith at the height of his powers."
> Insider 62

"Ben was still clutching his lightsaber when he reached an access tunnel that led back to Docking Bay 327. As he entered the tunnel, he sighted a tall, shadowy form at the tunnel's other the end. Even if Ben had never seen Darth Vader's cybernetic incarnation via a HoloNet broadcast on Tatooine, he still would have sensed the power of his former apprentice, now concealed within black armor."
> The Life and Legend of Obi-Wan Kenobi

"This is a fight you cannot win, Darth. Your power has matured since I taught you"
> A New Hope

"His power was great, now, greater than it had ever been. It shimmered from within, and resonated with the waves of darkness that flowed from the Emperor."
> Return of the Jedi

"You are Darth Vader, Lord of the Sith, master of the Dark Side of the Force. Once a power for good in the galaxy, you are now feared as the ultimate evil. Obi-Wan Kenobi, a Jedi Knight, opened you to the power of the Force. You became his apprentice and learned the ways of the Jedi. But Kenobi's methods were slow and difficult, not quick and easy as you hoped they would be.

So you gave yourself over to the Dark Side, allowing it to consume you so that you could be reborn in a more powerful image. Now you stand with the Emperor, bent on subjugating the entire galaxy to his New Order."
> Lightsaber Dueling Pack: Darth Vader

"Obi-Wan, enraged by betryal, battled Vader in an epic clash of lightsbers. Kenobi emerged victorious, sure that his one-time companion and pupil was destroyed. But the Force was strong in Vader, stronger than Kenobi knew, and somehow, Vader survived the terrible wounds he received.

Vader survived, but not unscarred-his shattered body encased in life-supporting armor and a breath mask. In spite of these handicaps, Vader thrived. in fact, he found a way to turn these to his advantage. He had his breath mask crafted into a sinister black helmet and, donning a black cloak over his black armor, he became a figure out of nightmare. From the ashes of defeat, Vader emerged even stronger."
> Lightsaber Dueling Pack: Darth Vader

"More powerful in the Force than ever before as well as a master of the lightsaber, Darth Vader prepares for his final battle as the Rebel fleet hammers the fully operational Death Star."
> Darth Vader: Return of Anakin Skywalker

Vader FAR surpassed Anakin in power, even by the time of the Battle of Yavin. As godly as Anakin was, he ain't s h i t compared to Vader. Hell, SotE Luke was stated by Vader himself to possibly be stronger than Anakin, RotJ Luke was stated to be the strongest Jedi who'd ever lived, and Vader was STILL vastly stronger than him.
hb
hbn 4 mo 27 d
Anakin Skywalker vs Darth Vader #

Darth Vader Vader is more powerful with the force but has less potential. He is also a better dualist.

Anakin Skywalker 1: Star Wars Insider 86 has Poblo Hidalgo saying: "Not only is the blue lightning no longer an innovation, Luke's inability to counter it, as Yoda did in Episode III, may give the audiences even more reason to worry -Luke is not that powerful a Jedi."

2: 'Darth Vader was encased in sinister black armor. The man underneath was mortally wounded in a lightsaber duel, and the dark suit includes extensive machinery to keep Vader alive. The sounds of his mechanical lungs accompany his every step. "Such injuries greatly diminished his ability to use the Force, but Vader is still very powerful" _Star Wars Encyclopedia - Darth Vader.

3: "An epic duel made impossible by time. The fully grown Jedi Knight Luke Skywalker crosses lightsabers with Anakin Skywalker before his brutal defeat on Mustafar. Both Skywalkers are at the peak of their powers." (RotS Anakin is described as at his peak of power not Vader) _Star Wars Head-To-Head

4: "Now he's half-machine and half-man so he's lost a lot of the power of the Force and a lot of his ability to become more powerful than the Emperor." _ Empire Strikes Back George Lucas DVD commentary

5: Here https://images.app.goo.gl/v4tJ4Tp6AJU3sPX69 it's said Vader's hinderance (his suit and injuries) will weaken him for life meaning not even your lord and savior RotJ Vader or his son are even close to Anakin or Windu.

6: Fightsaber: “both combatants were shells of there former selves”

7: from the mouth of Palpatine himself 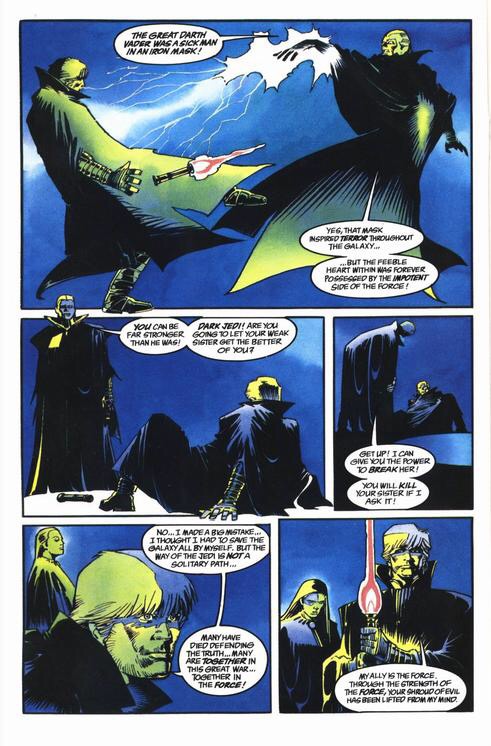 8: the DVD featurette of TPM had Lucas saying “we’ve never seen real Jedi at work, only crippled Half droid half human and little boys who learn from the old people” Lucas himself thinks prequel era Jedi > Vader
Sorry but this site has too many con men
Last edited: 4 mo 7 d ago.

Darth Vader @Dark_Wing, I agree, but Vader in comics is way more powerful than both Anakin and Mace Windu, at least he has better feats and scales.

Anakin Skywalker In
Canon: yes
In Legends: no

Darth Vader Why do you think that Mace and Anakin are more powerful than Vader in legends?

Darth Vader Anakin is faster and more agile than his future self, But in turn. Look at Vader's superior power, strength, durability, force versatility and so on. Vader has no problems with agile Jedi (Take Ashoka for example) Now, I believe Vader would win this
show 4 replies

And you forgot to mention that Anakin is implied to have lost lots of his raw Force power after he burned, though I do agree it could go either way, it's almost like brawn vs brains if you think about it.
Last edited: 1 y 8 mo 7 d ago.

Anakin Skywalker Vader is stronger physically do to his cybernetics, but Anakin cripples Vader force power every day of the week and twice on Sunday.

Anakin Skywalker Anakin is also a better duelist do to his extra speed, and agility. I'll give Vader the Intelligence edge.

Darth Vader I did not know that @Dark_Wing)

Darth Vader Darth Vader is much stronger with the force then his younger version. Also he's more durable then Anakin to.
show 3 replies

Anakin Skywalker How is Darth Vader, a crippled version of his former self who needs a robotic full-body suit to even stay alive that happens to be extremely susceptible to force lightning, more powerful in the force somehow despite having less of his physical body and less mobility? Furthermore, how the hell is he "more durable" given he literally has a red button on his suit that restarts it and that he's missing three limbs? He's an older Anakin on life support not a stronger entity somehow.

Darth Vader So your telling me Darth Vader, a person who dominated the Summa Verminoth's mind and opened the door to death, somebody who can focus there rage unlike most sith, flooded a city, and also killed a planet sized creature and plus remember he is still Anakin after all so he remembers his form+ other forms

Anakin Skywalker Whoopsie I forgot how much of a jobber Darth Vader really is, Anakin takes this!

Anakin Skywalker Vader is just a crippled, slower, and older version of Anakin, maybe more experienced and brutal but Anakin's feats are much better.
show 1 reply

Anakin Skywalker IKR I don't see how they think a crippled and older double is going to win.

Anakin Skywalker He has jas some much more. Second to no one and at full power vader wouldn't stand a chance. It be like another fight with star killer.
show 2 replies

Anakin Skywalker Earthquake, if you're going to use the site stats to make a decision what the hell are you doing here?
You might as well of just said you concede that you don't know what you're talking about and you're using predetermined numbers that have been proven to be innacurate in the past. Return when you've actually researched the subject.